Here is the news - an update on the Gray Locke series.

The last two short stories for the next book are coming along. I had to make some changes, of course, due to the timetable I have for the stories and the events surrounding one of them, (it'll make sense once you read them). All is well. I'm very excited about the new stories. :)

In regards to the interview I had with the Advocate, (mentioned in Update #3), it wasn't published. It was to be featured in their newly revamped "Family Beat" insert, (a quarterly extra). The "Family Beat" was revamped - but no feature. I can only assume that they have other plans for the interview. Maybe it'll be in their weekly edition? Maybe it'll be the next quarter edition of "Family Beat"? Maybe it won't be featured at all? I'll post answers to those questions when/if I find out. :)

I am considering releasing The Mystery of the Weeping Rocks as an audiobook. I hope to experiment with that this weekend.

No further readings, appearances or interviews are scheduled at this time. My focus is on the next book.

That's all for now.

The next book is coming along. It is titled "The Chronicles of Cloverhill." It takes place in Gray's hometown of Marlborough, Massachusetts. Rather than chapters, it will contain four short stories. I'm very excited about it. :) I am hoping for an early spring release for this one.

I had an interview with Kelly Bevan McIlquham of The Advocate the other day. The Mystery of the Weeping Rocks will be featured in their "Family Beat" section.

The local bookstores carrying it have been updated as well, (Please see sidebar).

I continue to work on either trying to schedule book readings and/or book signings. There is also the possibility of this book being available as an audiobook. More on all that as they develop.

That's all for now. I'll post the article up once it's available.

NORTH ADAMS -- When city native Craig A. Chicoine was laid off from Sheffield Plastics last year, he didn’t see his departure after 14 years with the company as a bad thing.

"I’ve been using the time to pursue my dreams," Chicoine said Thursday.

One of those dreams was becoming a novelist, and he’ll celebrate the release of his first book, "Gray Locke: The Mystery of the Weeping Rocks," which is self-published, as part of Word Play at Papyri Books this Saturday at 7 p.m.

Set in North Adams, the book chronicles the adventures of a 10-year-old boy (named Gray Locke), who sets off to solve his first mystery while visiting family in the city. Although specific locations are not named in the book, a majority of the story takes place at Natural Bridge State Park.

"I have a special connection with Natural Bridge -- I’ve been going there all my life," Chicoine said. "The rock formations are incredible and something you don’t see anywhere else. Three of the chapters in the book take place there, starting with ‘the blasting rock.’ The characters refer to it as ‘the big rock.’ There’s also a chapter in the quarry part of Natural Bridge, where Gray goes into the field and then finds a cave. He also goes down to the [Hudson] brook, where the mills used to be."

The book is the first in what will be a series of five, with a second book scheduled for release sometime in March, Chicoine said.

"Initially, I was writing an adult novel about the same character," he said. "I was writing it in blog format, which allowed me to write it in entries. It was quite exciting. Frequently, I would write flashbacks as part of the story, and then realized that I should start from the beginning. I hope to finish the adult novel and publish it in a few years."

The first book will introduce young readers to Gray Locke, an inquisitive child by nature, who comes from a loving and supportive family. In the second book, Gray’s adventures will take place in his hometown of Marlborough, and several of his friends will be introduced. Books three and four will return to North Adams, Chicoine said.

Chicoine said he has been writing since age 14 and has about 10 different blogs going, along with several other projects.

Wordplay with C. A. Chicoine 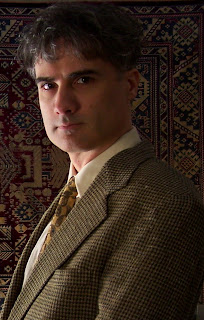 Click here for more information about this book and the author.

Craig Alan Chicoine reads excerpts from his new children’s book Gray Locke: The Mystery of the Weeping Rocks. The setting of the story was inspired by actual locations in North Adams - in particular, the Natural Bridge State Park - interwoven with factual local history surrounding the area.

With refreshments and open mic. Co-sponsored by Inkberry.

Source: http://berkshirevisualarts.org/downstreetart/?page_id=14
Posted by C.A. Chicoine at 11:19 AM No comments: